This is an archived historical WRF-Fire/WRF-SFIRE page. Please go to WRF-SFIRE user guide for the current software version.
This is a page with basic information about a software. Please see Template for creating software pages for what should be here.
The code under continued development in our repository and mirrors [1] [2] is called SFIRE, and the coupled code is called WRF and SFIRE. We reserve the designation WRF-Fire for the version released with WRF.

WRF-Fire combines the Weather Research and Forecasting model (WRF) with a fire code implementing a surface fire behavior model, called SFIRE, based on semi-empirical formulas calculate the rate of spread of the fire line (the interface between burning and unignited fuel) based on fuel properties, wind velocities from WRF, and terrain slope. The fire spread is implemented by the level set method. The heat release from the fire line as well as post-frontal heat release feeds back into WRF dynamics, affecting the simulated weather in the vicinity of the fire. The fire code is written in Fortran 90 following WRF coding conventions. It is integrated as a physics option, called from WRF as a subroutine. It calls WRF libraries for utilities such as I/O and communication between MPI processes. The fire code executes on a part of the domain, called a tile (in WRF nomenclature). All communication between the tiles is in the caller; thus, one time step requires multiple calls to WRF-Fire.

WRF-Fire is essentially a reimplementation of CAWFE with the weather model replaced by WRF and with the fire spread implemented by the level set method in SFIRE. The subroutines for the computation of the rate of spread and for the insertion of the heat flux to the atmosphere are taken from CAWFE. Click on the following images for the origins and a summary of current capabilities of WRF-Fire: 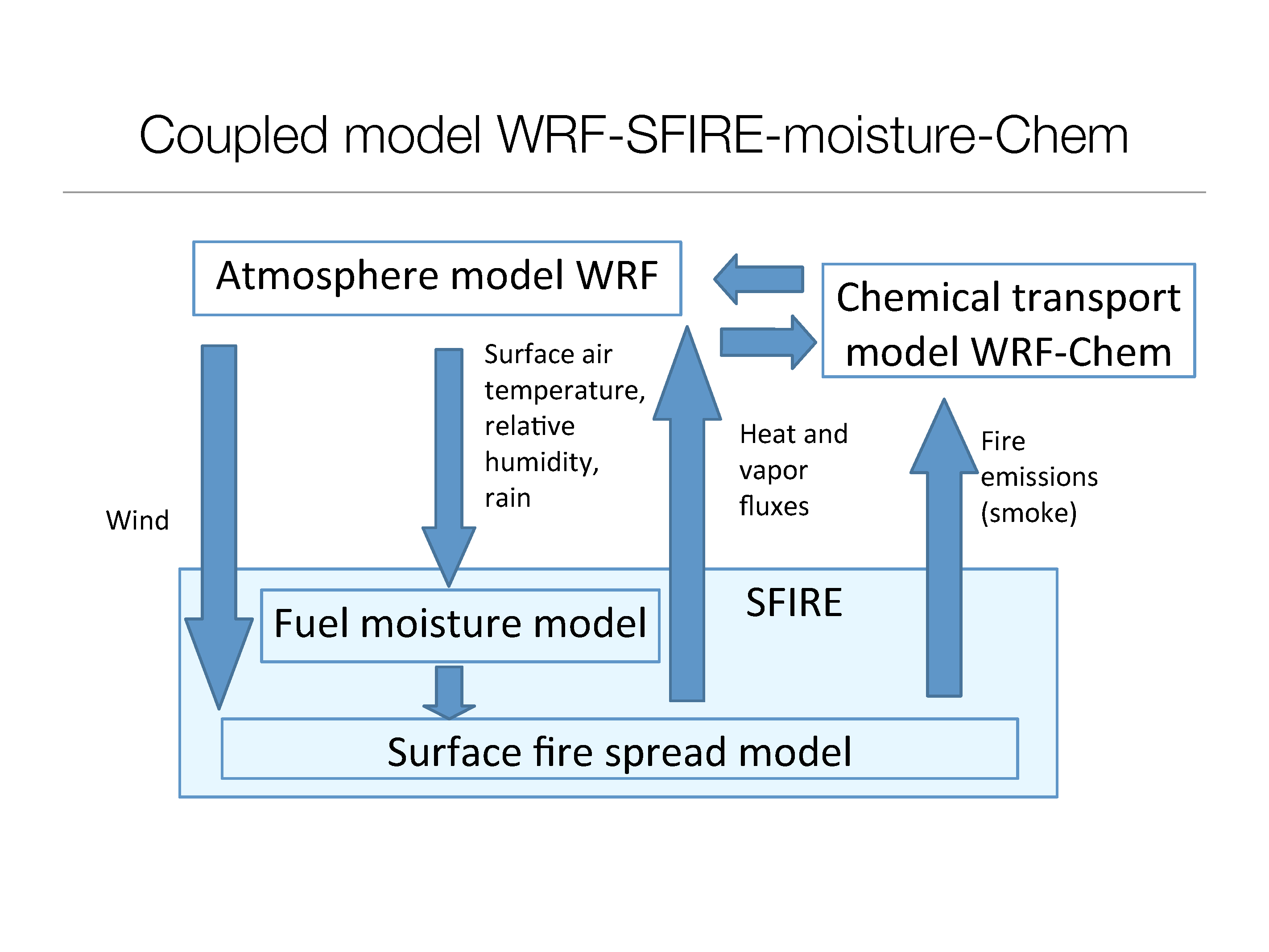 The development version is called SFIRE; further information and links to downloads are in the Users' Guide. We'll be happy to consider additional features. A restricted version is available in WRF releases.

All input, output, and restart files (with the complete model state) are in NetCDF format.

Fortran 90 with CPP preprocessor. Part of the WRF code is generated by C programs from a description in the registry.

When you write us, please:

We welcome contributions and discussion on the pages of this wiki. Please see the Main Page for How to get an account.