As of WRF 3.4, WRF-Chem is now included in the SFire repository. Fire emissions can be now input into WRF-Chem as chemical species or a simple smoke tracer. 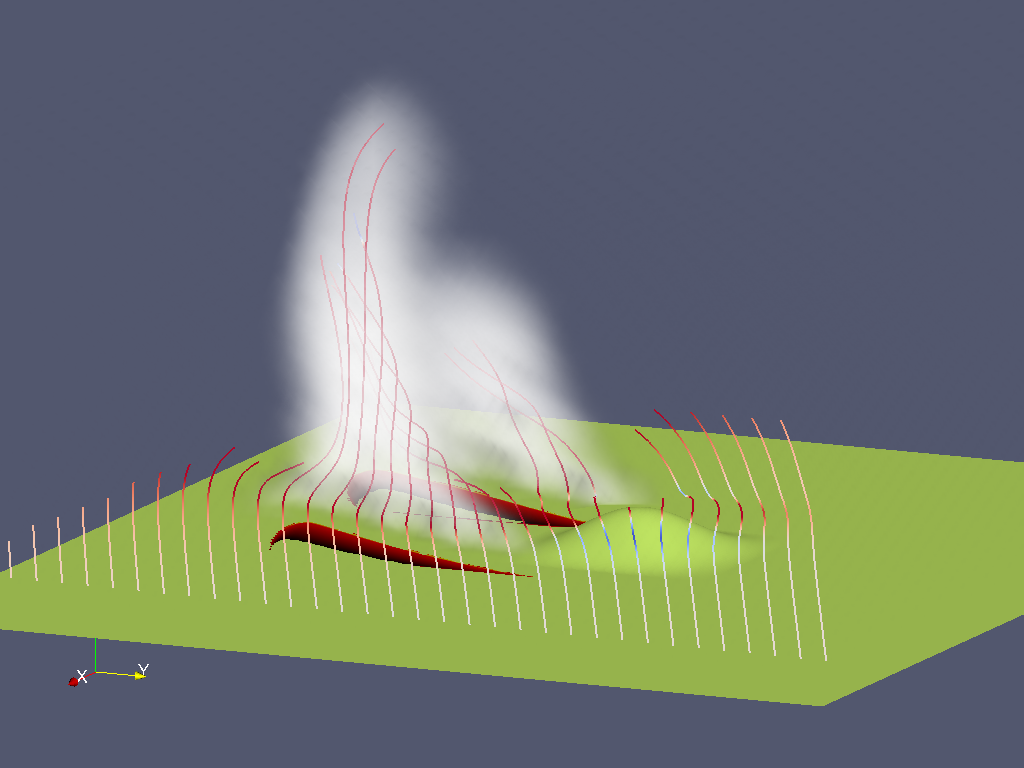 Compiling the code with support for WRF-Chem is similar to the standard procedure. You must set an environment variable WRF_CHEM and configure with the argument chem as follows.

An idealized example based on the hill case has been created in test/em_fire/chem Note that sfc_full_init =.true. is required in the &fire section of namelist.input to initialize USGS landuse, which is required by WRF-Chem. The tracer selected by tracer_opt=1 will appear as an atmospheric variable in the output file with the name smoke. The chemical species in the atmosphere, selected by chem_opt, will appear under their respective names, such as n2o5.

The selection of the model in WRF-Chem is controlled by namelist variables tracer_opt in the &dynamics section and chem_opt in the &chemistry section of namelist.input. At the moment, the coupling supports tracer_opt = 1, which creates a single tracer called smoke, and a subset of RADM2 (chem_opt=2) and MOZART (chem_opt=112 or 119) variables. The option tracer_opt = 2 does not require WRF-Chem, and it creates tracers called tr17_1 to tr17_8, which are inserted proportionally to the fuel burned according to the emission factors in file namelist.fire_emissions. The properties of the tracers slightly differ, and the tracers work slightly differently with and without WRF-Chem compiled, as described in file chem/module_input_tracer.F.

In each time step, the coupling code adds the fire emissions created in the time step to the first layer of atmosphere cells. The chemistry state arrays are have unit of concentrations (ppmv), so the amounts of the inserted species are scaled by the dry air mass in the first layer. The amount of the chemical species created is determined from the amount of fuel burned directly by an emissions table, while the smoke tracer uses the fire ground heat flux GRNHFX as a proxy. The emissions table contains the amounts of emissions fuel burned in g/kg or mol/kg. The emissions tables are specified in file namelist.fire_emissions. This file contains a line for each species like

with emissions (g/kg fuel or mol/kg fuel) for each of the fuel categories used (by default, the 13 Anderson's categories).

There are two additional variables in namelist.fire_emissions:

is a list of chem_opt values intended to be used with the table. However, presently, the code does not check if the file lists other chemistry species supported by the coupling code, not just those for the given chem_opt. If it does, the results can be upredictable. The variable

will enable printing of the totals of each emissions species at the end of every time step.

You need to copy or link one of them to namelist.fire_emissions, such as

WRF-Chem contains a multitude of arrays representing concentrations of chemical species. The typical method of injecting data into the simulation involves generating emission input data files from standard sources. These sources are read into the code using auxiliary input streams and interpolated into the species arrays in the emissions module. For the coupling with SFIRE, turning off file input in the namelist seems to initialize the emission arrays to zero. This eliminates the need to generate useless emission files.

WRF-Chem stores its state in arrays chem and tracer. These arrays are four dimensional indexed like (x,z,y,s), where s is the chemical species. The domain structure contains scalars such as p_smoke (into the tracer array) and p_nh4 (into the chem array) that give the species index for each type. The species selections are specific to different chemistry options (chem_opt) from the registry; however, even unused species have their index set to 1. The dynamics section of the namelist has an option for tracer_opt. This controls what tracers are generated for Chem.

Since fuel is given at the fire grid resolution, the emissions are computed at the fire resolution and then averaged to the atmospheric resolution, where the chemistry operates. However, since the memory demands of a 3D array at fire resolution (two surface dimensions and chemical species) would be excessive, the contributions of the emissions are computed on the fly and added to the respective atmospheric cell immediately. This results in code that straddles the otherwise strict division in SFIRE between fire computations on the fire grid, which are independent of WRF, and the atmospheric computations related to WRF, which otherwise consist of interpolation only and should not contain any other code. So, subroutine add_fire_emissions_to_chem, which adds chemical species to the chem array, was derived from the utility sum_2d_cells by adding chemistry-specific code.