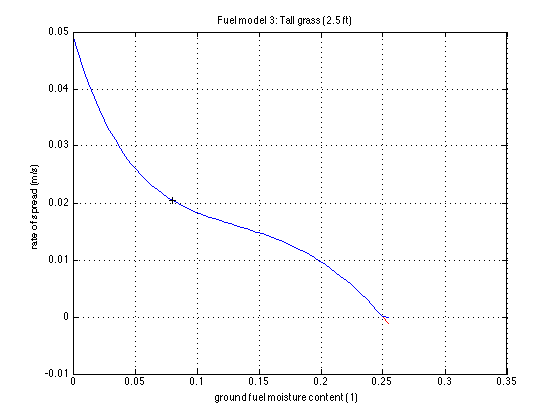 For this reason, we have coupled the ﬁre spread model with a simple fuel moisture model integrated with WRF and SFIRE. The model takes atmospheric state from WRF and provides fuel moisture to SFIRE.

The fuel is considered to consist of components - called moisture classes here - such as those with standard 1, 10, and 100 hour lag time. Each fuel category is a mixture of the moisture classes with the proportions given per the fuel category. The temperature and the relative humidity of the air (from the WRF atmosphere model) determine the fuel equilibrium moisture contents. In each class, the moisture contents approaches the equilibrium exponentially in time, with 63% of the difference gone within the given time lag if the equilibrium is constant in time. This is modeled by a standard time-lag differential equation and the class moisture contents generally tracks a time-varying equilibrium with a delay. To model hysteresis effects, there is a higher drying equilibrium and a lower wetting equilibrium; when the fuel moisture is between the two, it does not change. The equilibria are computed from the atmospheric state from WRF. During rain, the equilibrium moisture is replaced by the saturation moisture contents, and the time lag depends on rain intensity. If the rain intensity is under the given rain threshold, no rain wetting (soaking) takes place. For more intense rain, the time lag decreases and approaches the given soaking time lag exponentially, with 63% of the asymptotic value achieved at a given saturation rain intensity.

The moisture classes are modeled on the atmospheric grid, then interpolated to fire grid points and combined in proportions given the fuel category at the fire grid point. The moisture model can run with time step larger than the fire model time step. The numerical method used is stable for arbitrarily large time steps and exact if the equilibrium moisture is constant for the duration of the time step.

The default rain wetting coefficients were fitted for fine fuels (10 hour moisture class) for the Canadian fire danger rating system. Both pictures show the increase of fuel moisture over 24 hours for a given rain intensity. 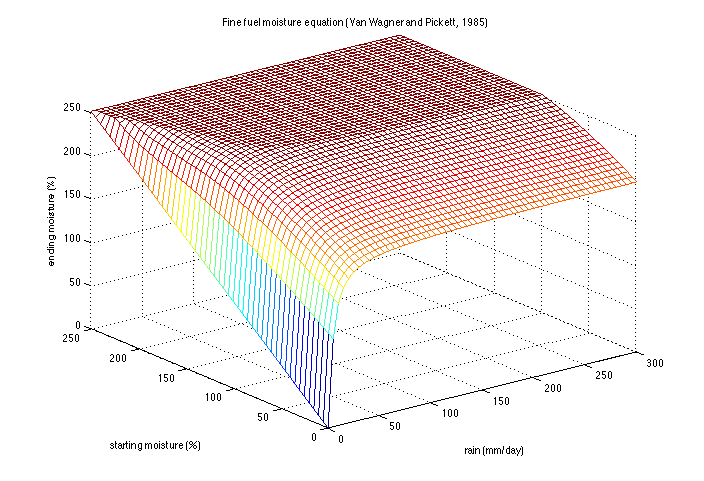 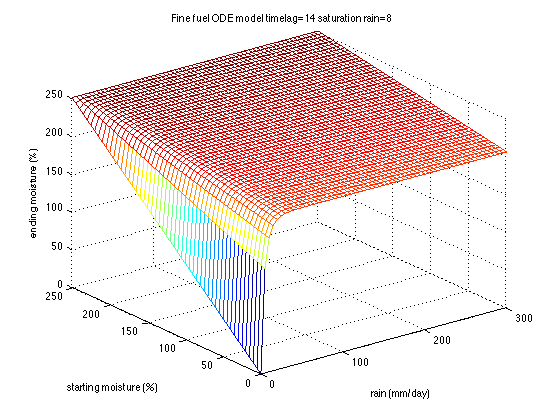 The treatment of moisture consists of two parts which can be activated independently, and can run also independently of the fire model itself.

The fuel moisture in fmc_g can be also set directly to scalar constant fuelmc_g from namelist.fire by specifying fire_fmc_read=1 in namelist.input. This setting conflicts with using the moisture model. Some valid combinations are:

When the fire model runs ( fmoist_run=.true.), the initial values of fmc_gc need to be specified. This is done for each moisture class separately by specifying the values of fmc_gc_initialization in the &moisture section of namelist.fire:

where Time is the time from the start of the run, T the temperature, Q the air moisture contents, and RAIN the rain intensity.

make moisture will build moisture.exe which will take existing wrfout files as input, use the atmospheric state to run the moisture model, and write the resulting fuel moisture class fields to file moisture.nc. The resulting frames of fmc_gc are meant be copied from moisture.nc to wrfinput by user's code (for example, using our ncread and ncreplace utilities in matlab).